WC vs History: They Shall Know Us By the Shape of Our Tail

Quick and accurate target identification is crucial in combat situations. Knowing your enemy and their capabilities can be the difference between life and death for you and your wingmen. For today's special edition of WC vs History we bring you a variety of target silhouettes.

The Confederation Class Dreadnaught entered service in the early 2660s. The class is easily identifiable by its distinct "fins" on the rear section of the dreadnaught. The desire for the fighter carrying heavy gun capital ship can be traced back to the first days of naval aviation. The Confederation class is an expression of that desire. Carrying over 100 fighters and mounting serious anti-ship weapons in its eight anti-matters guns and the Phase Transit Cannon, the Confederation class was a highly desirable target for the Kilrathi to identify and destroy. There are only two known ships of the class, the TCS Confederation and TCS Concordia. The TCS Concordia (CVS-65) joined the Fleet in 2661. She fought in many of the major engagements of the last decade of the war including the Second Enigma Campaign and the Battles of Vukar Tag, Sirius, and Earth. She was lost in a rearguard action in the Vespus System in early 2669.

Many of the most famous names of the war served onboard the Concordia during her decade long career including Admiral Geoffrey Tolwyn, Colonels Jeannette Devereaux and, future Commodore and greatest hero of the war Christopher Blair, 1st Lieutenant, future Rear Admiral and hero of Tarawa Raid, Jason Bondarevsky, and two of the war’s greatest traitors, Major Zachary Colson and Lt. Colonel Ralgha nar Hhallas.

The USS Wasp (CV-7) was the product of the interwar arms agreement known as the Washington Naval Treaty. Desiring to squeeze the largest possible air group into the smallest possible space, the USS Wasp was the result. She is the only ship of her class and the basic design is a smaller version of the Yorktown class with modifications that produced serious design flaws. The Wasp joined the Fleet in April 1939 and first served with the Atlantic Fleet in World War II. The Wasp delivered two deckloads of Supermarine Spitfires to the island of Malta in the Mediterranean in April and May 1942. Prior to the second run in May, Prime Minister Winston Churchill was concerned that Malta would be destroyed from the air by German and Italian forces and asked President Franklin Roosevelt if the Wasp could take “another good sting” at delivering the much needed fighters.

As the Battle of the Coral Sea was coming to a close in the Pacific, the USS Wasp and HMS Eagle made a reinforcement run towards the island of Malta in what was codenamed Operation Bowery. The two Allied carriers delivered more than 60 Supermarine Spitfire fighters to the besieged island. Following the operation Churchill sent a short and witty message to the ship’s captain and crew: “Many thanks to you all for the timely help. Who said a Wasp couldn't sting twice?"

The Wasp joined the Pacific Fleet in the summer of 1942 following the major battles in the Coral Sea in May and the around Midway in June. The Wasp was deployed to the South Pacific where on the seventh of August, the Wasp along with the USS Saratoga (CV-3) and Enterprise (CV-6) provided air support US Marines participating in Operation Watchtower, the invasion of Guadalcanal. The Wasp missed the Battle of the Eastern Solomons on August 24th (Yesterday for those paying attention!) when it was ordered south to refuel by Admiral Fletcher because the Japanese forces had not yet been discovered at the end of the day on August 23rd.

The USS Wasp met her end as a result of what can be argued to be the most effective torpedo salvo in the history of warfare in September 1942. The Japanese submarine I-19, patrolling an area that would become known as “Torpedo Alley” because of the number of ships hit transiting it, fired six Type 95, a smaller version of the dreaded Type 93, at the Wasp. Three of the torpedoes struck home on the carrier. They had been noticed by crewmembers too late for any evasive actions to be taken. The torpedoes struck the highly explosive avgas storage and magazines areas of the carrier. The ship quickly burned and 35 minutes after the torpedoes struck home, Captain Forrest Sherman ordered “Abandon Ship.” Six minutes after the Wasp had been hit, the USS O’Brian (DD-145) was struck by one of the remaining three torpedoes fired by I-19. A minute after the O’Brian was struck the USS North Carolina (BB-55) took one of the remaining torpedoes. It was over 7 miles away from the Wasp when it was it! Both the Wasp and O’Brian would sink while the North Carolina would be out of the war for several months as she was repaired and upgraded before returning to the South Pacific. 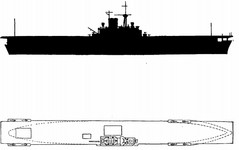 More than one Confederation pilot has mistaken a Drakhri for a one of the Dralthi family of fighters and a Dralthi for Drakhri. While the two fighters look very similar because of their large semicircle wings the fighters have some significant differences.. The way a pilot can distinguish the two fighters is by looking for the over-the-cockpit missile rack. Only the Drakhri and the late-war model Dralthi VII use this configuration.

The Mitsubishi A6M “Zero” fighter was Japan’s premier and longest-serving fighter of World War II. It was designed to outrange and outfly any potential opponent which for the first year of the war it did extremely well. The Zero is identifiable by its rounded wingtips and distinct engine cowling. Often called one of the beautiful aircraft, its beauty hides its inherent weaknesses in lacking armor of almost any kind and self-sealing fuel tanks in order to save on weight. The difficulty the Japanese had in producing high quality aircraft engines meant they had to get savings anywhere they could. The armament of the Zero, while formidable on paper was truly only as good as the number of 20 mm cannon rounds remaining. The 7.7 mm machine gun rounds typically did not pack enough punch to take down more ruggedly built American aircraft. 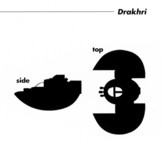 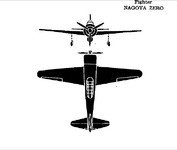 The A-17 Broadsword was the standard Confederation bomber throughout the Terran-Kilrathi War. Every variant of this bomber carried multiple large anti-ship torpedoes and a formidable defensive armament. The three turrets found on later models were able to repulse multiple incoming attacks and allow more time for the pilot to complete the attack run. Even a single torpedo hit can be devastating to a capital ship. The Broadsword is easily identifiable by its large size, at 36 meters in length, it’s not difficult to spot the Broadswords among a force of Confederation fighters. The distinct wings and vertical surfaces also lend to easy identification.

The Boeing B-17 “Flying Fortress” was designed and used as a strategic bomber by the US Army Air Corps in all theaters of the Second World War. Carrying more than a dozen .50 caliber machine guns and having a range of more than 1,500 miles, early air power enthusiasts thought that bombers like the B-17 could win wars by themselves. The B-17 can be identified by its distinct nose section and large curved vertical tail. Later models had an additional chin turret to thwart head-on attacks that German pilots preferred because they discovered the lack of machine gun cover in that direction.

The Fralthra class cruiser was a Kilrathi heavy cruiser that saw combat in the Vega Campaign. It was a Fralthra that destroyed the famed TCS Beowulf. Fralthra often served as the center of carrier groups because of their large fighter complements. Multiple carrier groups formed around Fralthra were part of the 2667 attack on Ghorah Khar and Olympus. Fralthra are capable of operating even heavy fighters, with Jalkehi heaving been observed operating off of them. Possessing a similar silhouette with the Kamekh class corvette some pilots have been known to confuse the Fralthra and Kamekh, once even the TCS Concordia (CVS-65) made the mistake! Their designs are actually atypical for Kilrathi, lacking most of the “knife edge” aspects. Combined assaults are necessary to engage a Fralthra, the TCSNA's updated simulator program doesn't even allow students to roleplay single wing missions against Fralthra.

The Japanese Tone class heavy cruisers were the last two heavy cruisers built for the Imperial Japanese Navy. The Tone class were to be the long range eyes of the fleet through extensive use of multiple floatplanes stored on the cruisers. Originally designed as members of the Mogami class, when serious faults were discovered in the original designs the Tone class was the result. The most distinct feature of the Tone class was the fact that all four of its main turrets were mounted in front of the bridge, the rear of the ship being utilized for the expanding flight operations.

The Tone had a long and mixed combat career, however its most famous moment came during the Battle of Midway when early on the morning of June 4. The Tone was to launch several floatplanes to search areas to the northwest of Midway. The scout plane known as Tone #4 was late in taking off due to unknown reasons. Not only was it late in launching, the scout plane most likely later flew directly over the American carriers groups but did not spot them immediately. The spotting report was then delayed for unknown reasons on the Tone before being passed to Admiral Nagumo on the Agaki. The Tone itself would be sunk by American forces at Kure in July 1945. 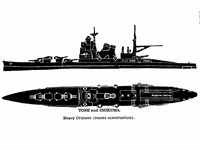 You can see all of Wing Commander II's silhouette's here, and you can download the entire United States War Department identification manuals below for American and Japanese ships and aircraft: