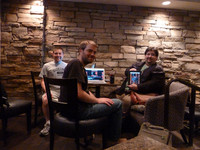 As you have heard, ace, Chris and I are in Austin, Texas looking at the University of Texas Videogames Archive. This museum collection includes the personal papers of Origin luminaries including Richard Garriott, The Fatman, Warren Spector, Gordon Walton and Billy Cain. Thanks to donations from our collections, there will even be a WCNews archive available soon! We don't have time for a full analysis yet, but I wanted to share with you some of the highlights: