Here are high-resolution slide scans of two of Wing Commander's most mysterious images. The first, showing a young Blair in front of a group of photographers, appeared on the Wing Commander II box. In the actual game the scene was moved to Admiral Tolwyn's office and used the 'ten years later' Blair. That was all done to save disk space; as originally scripted, you would have seen Blair at his trial (some of the graphics for the court scene were later reused in Special Operations 2). The second is a smooth looking Gothri image which appears on various Special Operations-related boxes. Although the addon disks do introduce the Gothri, there is no cutscene such as the one indicated here (and the fighters don't look nearly as nice in combat). 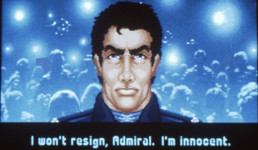 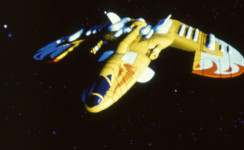