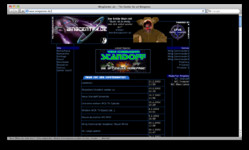 Shotglass.de is celebrating ten years of German Wing Commander community hubs! Patrik's current WC news site came online just recently, but it traces its roots back to the original WingCenter.net, which is currently managed by the Saga team. WingCenter.de has put together a nice retrospective article with screenshots of the original site and a recent history update.

There's also an easy raffle drawing! All you need to do is comment on this news post to enter. Partipants have a chance to win a copy of Sword of the Stars: Complete Collection or the GoG release of Wing Commander Privateer! If you don't read German, just hit up Google Translate!

10 Years of WingCenter - A Review

When you think back over the years, sometimes it's surprising how much time has passed. As I watched the dates go by on the calendar, I realized that it's already been ten years since I founded WingCenter. After a five-year break, ShotGlass.de punctually (though unintentally) arrived just in time to recognize the occasion. This is reason enough to look back and review the journey so far.