Privateer's famous Tarsus scout may have made a cameo appearance on Babylon 5--check out the ship below, which appeared in the episode "War Without End". After the episode aired, B5 creator J. Michael Straczynski admitted to being Wing Commander fan but not borrowing the Tarsus:

No, actually, I've never gotten into the Privateer stuff...I have the new Wing Commander, but my joystick is screwed up (others have made that observation before), so it's waiting until I can yank the computer out of its niche and install the Fancy New Joystick I bought that has fifteen thousand different plug-in points. 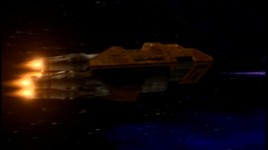