Wing Commander III and Prophecy actress Ginger Lynn Allen is selling two sets of her Wing Commander III script pages--the pages she used in the role, with her lines highlighted! Each auction includes an extremely cool signed photograph from the game's funeral scene--which also shows a uniformed Chris Roberts making a cameo as a Victory crewman! She has a nice paragraph describing her involvement in the game:

I’m a lucky girl who’s had the opportunity to work on and in some amazing projects in both the adult film industry as well as mainstream Hollywood projects. Wing Commander III: Heart of the Tiger is the first of two computer games in which I appeared as Rachel Coriolis; the ships weapons officer.

Auction #1: This script segment includes Rachel's offer to let Blair fly the Excalibur and her attempt to console Blair after he learns of Angel's death. (Ginger was kind enough to provide great scans of the photographs and the pages, reproduced here for posterity--that's better than a lot of professional archives offer!)

Auction #2: This script segment covers the famous 'Flint or Rachel' kissing scene. That's a piece of history, right there! There's only a day left, so get your bids in now--there's no time to act... gingerly. 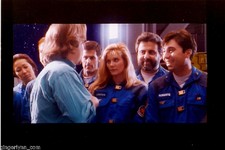