Mr. Lee's combined two of his biggest hobbies into one beautiful art form. He's recreated the Tiger's Claw bar with Lego bricks. It's really detailed and well done. As clever as this setup turned out, it's not the end of his project! The plan is to recreate a number of scenes from Wing Commander 1 and make a comic-style story out of the settings. We can't wait to see how this turns out! 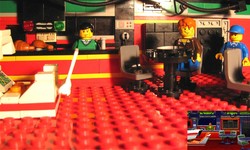 My name is Marcus and I'm from Germany. I'm a great Fan from all Wing Commander games, but I love WC 1 and WC 2.

I will give you a first picture of my project. You see the bar of the Tiger's Claw with the brick-characters of Shotglass, Hunter and Col. Halcyon.