TonViper's Excalibur is nearly complete. Since we last saw it, the ship has taken on a darker tone. Details like guns, engines, decals, vents and armoring are all more clear as well. He's still planning to do a specular and bump map, and then the ship can be integrated into the Homeworld 2 mod. 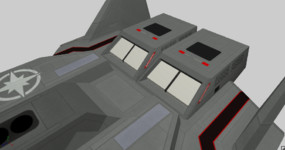 I decided to darken the texture. I pretty much chose the original base color in part based on the color of a fighter surface image I had lying around, so I thought it was about time to start tweaking it to get closer to what it would be based on the color shots I have of it. I may tweak it further to make it less blue later on, but for now I like the color.

I've rounded the corners of the intakes on the engine blocks too. It's very hard to get the edges to line up properly when I add polygons between where two textures separate, and harder still when I have lines going across the divide, since I have to find the exact same position and scale for the texture when I remap it to account for the extra polygons.