Electronic Arts has announced that they have stopped sales to Russia and Belarus as a result of the ongoing war in Ukraine. This is on top of their plans to cut Russian and Belarusian teams from upcoming FIFA and NHL games. As a result, this effectively means that digital Wing Commander sales (via the Origin store) are being used as wartime sanctions. It is of course not lost on us that withholding Wing Commander will not stop the tanks on the ground, but it's one small part of the larger effort to step up pressure on the Putin regime. You can find a list of ways to more directly support relief efforts in the region here. 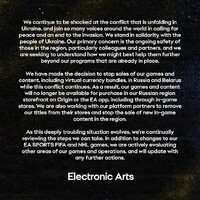