AD has been on a twenty-three year mission to learn more about all things relating to the Wing Commander Movie, and his latest research is about the "open matte" broadcast of the film. At least Australia was airing this version in 2008, and there may have been other times and places that got it as well. As you can see by the example below, by adjusting where the edge of the frame is, viewers can see detail like the universe map's border and Paladin's journal in the intro. It'd be pretty amazing to see what other visual data might exist out there! If you have a copy or any more detail, please let AD know! 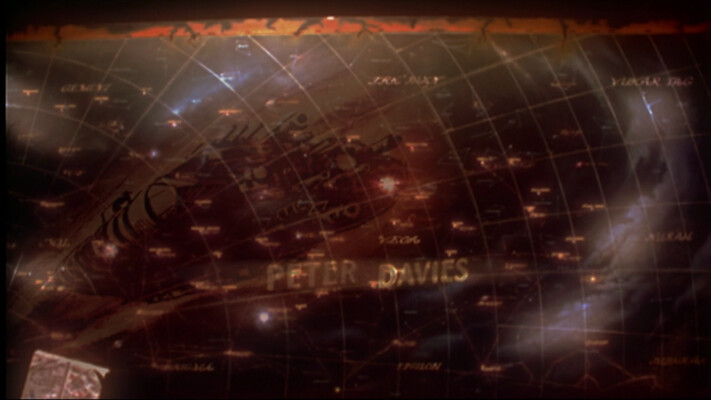 The DVD and Bluray are in 2.35:1 as intended. This screenshot is the only proof that it aired that way I've seen. Anyone else out there happen to catch the film on TV in this format?

The extra map borders - not normally visible in the movie - in that shot match the high quality digitizing of this map I've seen since that update was posted. The map hung for a number of years in the LA Cloud Imperium offices of Chris Roberts.

Paladin's notebook in the lower left is also visible. It's the one he's making notes in while looking at the star charts at the beginning of the movie... He also uses that notebook when he inputs the shortcut coordinates for the Claw to make the jump into the Ulysses corridor