Lights Out for Amiga WC in Vintage Review

Coffeehound RetroSharka has a new mag scan today that highlights an interesting piece of Amiga history. Rather than just a review of Wing Commander, the magazine Amiga Power reviewed a compilation called 'Space Legends' in August 1993. This includes Wing Commander, Megatraveller 1 and Elite Plus. It's a pretty hilarious review because the author is just not a fan of any of these games and never was. Maybe he wasn't the best choice to put on this assignment - even his editor appeared incredulous. Despite high marks for each when they were reviewed individually, these three legends of space eeked out a 79% combined. At least it makes for some amusing reading today! 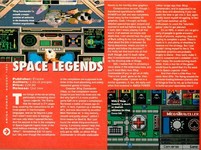 The AmigaMini has been announced, so that feels like a fine time to sneak in some more Amiga themed #GameMagNibbles.

Wot, only 79% for one of the best compilations on Amiga? A scandal! This compi was my gateway to classic Elite, Wing Commander, and the first proper sci-fi RPG I ever played.