The Belgian Chess History website runs a remarkable blog where they analyze and dissect chess games in progress across a variety of film and television. They look at the chess board setups and discuss how the characters (often inexplicably) got into their situation. Wing Commander has been featured, and it got a characteristically brutal scrubbing. Not only do they hate the setup, they're not fond of the characters nor even the chess pieces! You can find the full Belgian Chess History article here.

LOAF actually researched and found the actual chess set used in the WC Movie a while back. He also put together a slightly more accurate placement of the pieces, pictured below.

LOAF: It's just not a situation anyone would reasonably get to. Unless Bishop, a man named after a chess piece with said piece painted on his Rapier, is particularly terrible at chess. 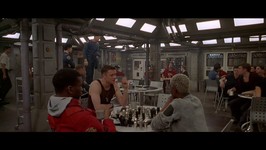 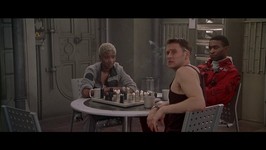 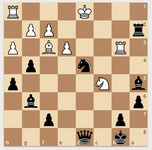 Belgian Chess History: The idiot on the table in the background is, unfortunately, one of our main characters. He is introducing himself and his companion to the crew of the spaceship they just entered. Since he has the brain of a hard-boiled shrimp, it doesn’t go very well. But it seems like the director knew that he should focus as little as possible on Matthew Lillard and show some chess players instead.

Let us follow this very wise piece of advice and look what’s happening on the board. Immediately, I get a hit of nostalgia: the board has been set up wrongly with a1 a white square and, believe it or not, that’s been a while. The next thing we note it that, in the future, people apparently use really inconvenient, stumpy pieces that all look alike. That makes our task a bit harder, but we get good enough camera angles to make a reasonably reliable reconstruction:

Lillard, who is watching the game, suggests: "You want to take his castle with your little horsie."

A brilliant piece of advice, eloquently delivered. He goes on to claim, quite wrongly, that it is checkmate. This claim is immediately accepted, since this is a very stupid flick.