The German Shock 2 gaming site has posted a new speculation piece about the potential for a new Wing Commander game. They base this on comments in Jeff Grubb's GamesBeats show. As the story goes, EA Motive of Star Wars Squadrons fame is working on a new game that's a comeback of a popular franchise. For many years, Wing Commander was in a distant third place behind Electronic Arts' other space sim franchises, Star Wars and Mass Effect, so prospects were slim. A lot has changed lately with Star Wars going non-exclusive and the mixed fortunes of the Mass Effect franchise. This means Wing Commander is certainly a potential contender once again, although the stars would need to align for a viable project to actually see the light of day. It's only a matter of time though, and we'll be here to bring you the news when it happens! 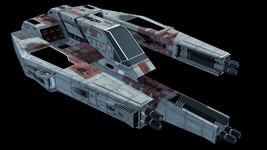 Google's translate features are working better than ever these days, so you can find a well translated copy of the original article here. While you're there, you can also find another fun piece titled "Games I Miss # 170: Wing Commander II: Vengeance of the Kilrathi" here.