Chronocidal Guy has returned with an update on his elaborate 3D printed Excalibur model. He's taken advantage of valuable stay-at-home time over the last year to refine the design into a number of purposeful modules that come together into a highly accurate representation, complete with exquisite panel lines. The guns, engines and other components have also been finely modeled to closely resemble the originals. His finished product looks superb, but there's always room for further tinkering and enhancement in the future!

Hey folks, I figured I'd drop an update on this project after all this time. The pandemic gave me a lot of time to work from home, so it was a big opportunity to let my printer operate in the background. I didn't want to necro any old print threads, or derail someone else's, but if any mods think it's appropriate, feel free to merge this one with another topic. I mostly didn't want to take away from the beautiful Hornet model posted more recently.

I think my first attempt at this model was through Shapeways back in 2012 or so, and at that time, it was about $70 for a 7-inch model. That version can still be found there, but it's a completely blank model, with no panel lines or other details. Also, in the years since I uploaded it, the price has ballooned to over $150 for what is basically their lowest quality print.

After trying to manually engrave panel details into that Shapeways print, I decided it made more sense to embed them in the model. Come 2019, I picked up a larger enclosed printer, and used that model as my first test project. That's where that bright red Excalibur came from. It came out really well, though being in a single piece made sanding it smooth an insane prospect.

So, I set to breaking that model out into a better set of solid parts that could be printed, and then slid together with interlocking tabs. After two years of working on and off on refining the model and details, and roughly 120 hours of printing, I'm happy to finally have a nice display-worthy sized model of this ship. 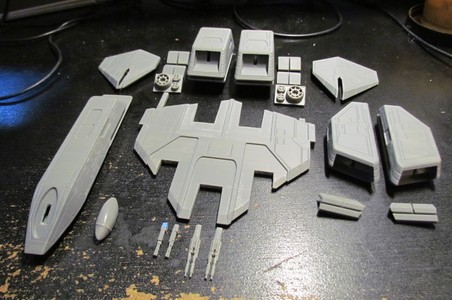 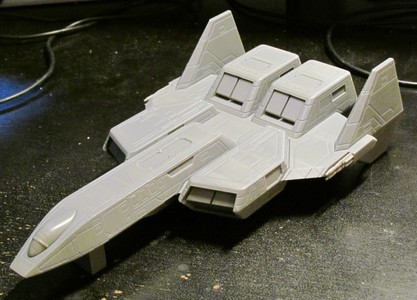 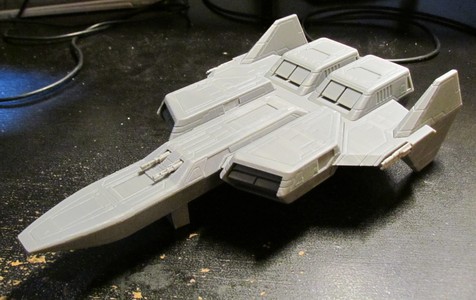 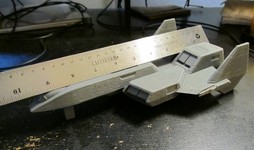 The original red version was a little under seven inches long, so I scaled this one up 50%, and it comes out to just about ten inches. Game stats say that's about 1/125 scale, but I think that number was inflated, since I think a 1/100 scale cockpit would fit easily in the nose. Maybe the next version will have a full cockpit, if I can get a vacuformed canopy made. I'd love to shoot for a 1/48 version.

Details are all taken as best as I can grab them from the highest resolution images of the Excalibur I could find, either from Victory Streak, or screenshots. One thing that did give me a few fits though.. I cannot for the life of me figure out exactly how the reaper cannons are supposed to be shaped. The tachyons are clearly visible in the CGI renders we have, and I've approximated the shape to make it printable. The reapers actually look like a tri-barreled design in the front schematic view, with a small shield on the inner side, so that's what I went with. 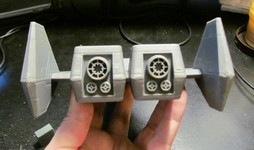 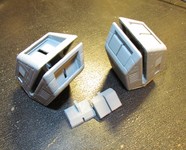 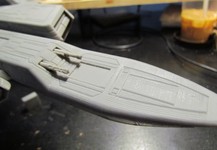 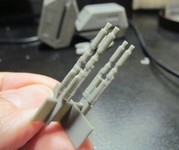 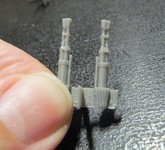 Parts all slide together with a satisfying squeak from the printed ridges rubbing in the plastic. I'm currently starting the process of sanding some of the parts down to remove the print texturing, and hope to have that done sometime in this decade. :)

While I did upload this model at Shapeways as a test, I cannot recommend getting it there in this size, because it looks like the full print would cost somewhere in the range of $300-$600 total, depending on the material used.

I'm currently debating whether to re-engineer the model with deeper recesses in the spots that contain darker detail panels, so I can make some panel inserts there. I might be able to print something to fit in them now, since the printer can go down to 0.1mm, but the insets are only about 1mm deep. I'm just not sure if I want to go through the process of printing another to make any improvements at this point.

All in all, I think the whole thing came out really close to the target. :D 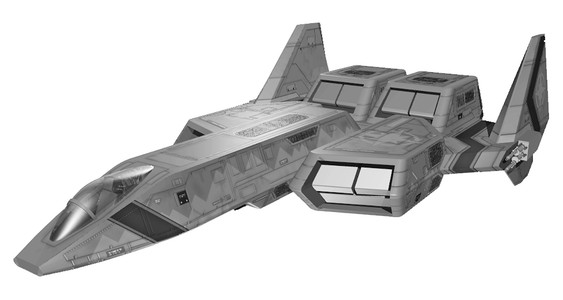 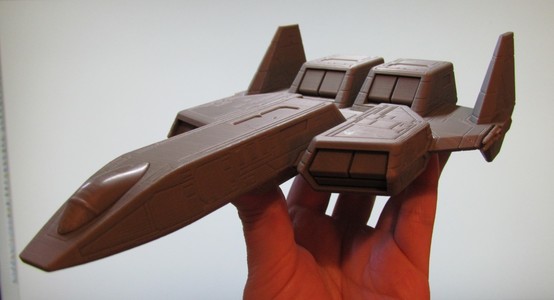 Will try and keep more progress updates coming here, as well as where you can get the actual model for download, once I get it where I like it.

Also, one funny tidbit I discovered while researching this.. the Excalibur CGI model used in the Kilrathi Saga intro cinematic was incomplete. It's entirely missing the reaper cannons, and the door panels over the front pods (what I assume are missile bays).