If you were on the hunt for all of the international copies and translations of Wing Commander, Dennis Mull has an extra twist for the German edition of Wing Commander 4! He's got two different versions with some minor differences. On a later printing, the back side font was cleaned up, the age rating sticker was printed on the box and a couple missing name credits were added. I love tiny things like this. Good luck hunting your copies down! 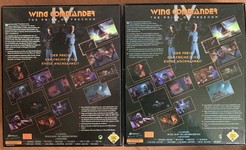 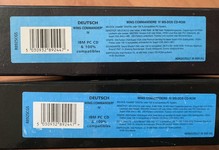 Release (right) and re-release (left). The differences are a different font on the back of the box and the sticker "USK 12" is printed on the box. Jeffrey "JC" Combs and Frank Roan are also added.