There is a long-standing claim that there was an Ultima cartoon created as either a TV pilot or straight-to-video OVA in Japan in 1989. This story continues that for whatever reason the episode was never aired or sold and was only rediscovered in the wreckage of a warehouse after a major earthquake in 1995. This is regularly repeated on social media and sometimes in legitimate articles. The story is paired with a brief portion of animation which is said to have been created for the show and then reused in a television commercial advertising Ultima: Exodus for the Famicom. It also sometimes references a quote from Shay Adams' Official Book of Ultima that mentions how "animated cartoons soon brought the Ultima story to television audiences" in Japan. It's a fascinating story and one that resonates because the information presented seems more than believable enough to escape much scrutiny. Indeed, Ultima was extremely popular in Japan at the time and did spawn a great deal of tie-in merchandise, the 1990 Official Book of Ultima does contain the above quote, there was a particularly devastating 1995 earthquake and the clip from the television commercial certainly exists. The issue, however, that the story is a fake.

The origin of the tale is an article written around the turn of the century and posted to a now-defunct Finnish anime fan site (available here via Wayback Machine). A quick translation reveals that it is a slightly more detailed version of that which has been repeated for years since, talking about the discovery of the lost Ultima tapes and how they were apparently sold at auction. But there's an ending that everyone has seemingly missed: hidden in invisible text at the bottom of the article is a disclaimer that the article is a joke! 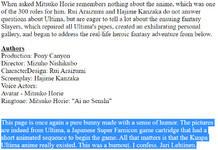 The story of the unsold pilot and the lost tapes and the earthquake and the auction as well as the 'details' about the show's producers are not real and were never intended to be taken seriously. Ultima was certainly very big in Japan and a great deal of tie-in merchandise was created ranging from CD soundtracks to manga adaptations of the game stories to a customizable card game to oddities like frisbees. What connects all these things, however, is that their existence has been exhaustively recorded for posterity. The idea that there is a lost television show that has somehow escaped the extremely organized late-1980s anime fandom (to say nothing of Ultima fans) is incredibly unlikely. The oft-discussed Official Book of Ultima quote does not say anything about the cartoon in question being a TV pilot or an OVA. It is almost certainly referencing the cartoon created as part of Ultima's first ever television commercial. It's even immediately followed by more information on commercials: "To promote the release of the computer version of Ultima V and the Nintendo IV, a series of prime time TV commercials starred Garriott as Lord British...")

The Ultima: Exodus commercial; note that the characters match the ones on the game's Japanese box.

That said, there was a largely unknown attempt to develop a mainstream Ultima animated series… but it took place in Los Angeles and not Japan. In 1995, Origin shopped both Wing Commander and Ultima as potential properties for licensing. Based on their newfound Hollywood connections developed through shooting Wing Commander III and IV, they included a particular push to develop both the properties as childrens' animated shows which were then a particularly popular tie-in media for IP. Series bibles and concept art were developed for both shows and they were presented to a number of studios, including Universal which bought Wing Commander Academy and also assisted with the early development of the Wing Commander film. The Ultima pitch was developed based on a series bible developed at Origin and used artwork created by Will Meugniot of ExoSquad (and later Warrior King) fame at Film Roman. A pilot was never purchased and there was no lost animation. A single piece of artwork from the pitch has been discovered:

In late 2000, a blind item appeared on legitimate news sites claiming that ADV Films was developing an Ultima tie-in film or series that could have finally realized the old rumor. Little is known of this project beyond that it would have been a tie-in to the cancelled Ultima Online 2. If a deal were ever actually signed it is unlikely it ever went past the initial concept (UO2 itself would never release, leaving a variety of orphaned tie-in media including a series of action figures and three novels which were hastily repurposed as mainline Ultima stories.)