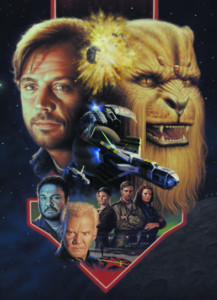 Origin Systems shipped the original PC version of Wing Commander III: Heart of the Tiger on Thursday, December 8, 1994, a whopping twenty-five years ago today. Heart of the Tiger was an immediate hit, selling hundreds of thousands of units to those lucky enough to own top of the line PCs that Christmas. The game was like nothing anyone had ever seen before, seamlessly blending advanced 3D graphical gameplay with interactive live action cutscenes starring familiar professional actors.

Wing Commander III's status as a true classic has never been in doubt, though its true impact on the history of video game development took some unexpected twists and turns. Upon release, it was felt that the game represented the next generation of entertainment media, harbinger of a new era of interactive games fused with Hollywood filmmaking. Sadly, Heart of the Tiger's blend of gaming genius and cinematic know-how proved to be a feat few could equal, ultimately condemning "interactive movies" to fad status. Nevertheless, many other aspects of the game set standards that are still recognizable in AAA game development today. These range from the large scale production processes developed to keep such a massive project on track to the revolutionary gameplay built around textured 3D objects, the decision to develop exclusively for CD-ROM media and the interactive conversations and missions that continue to inspire designers today.

For Wing Commander fans, Heart of the Tiger represents a Rubicon of sorts, the point at which the series went from being a set of extremely good games following one another to becoming a multimedia franchise. The unprecedented success of Wing Commander III was mana to the series' longtime fans, proof positive that Chris Roberts' genius could was recognizable to the world at large. Its success spawned licenses and spinoffs that would have been thought impossible a day earlier: Saturday morning cartoons, customizable card games, Privateer 2: The Darkening and ultimately a feature film. It's a game that took an already-great universe, turned it on its ear and made it something incredibly unique and special. It also brought Wing Commander to the nascent internet with fans coalescing on the Usenet around alt.games.wc3 and eventually on the World Wide Web through groups like the Wing Commander Ace's Club and Origin's Official Wing Commander Chat Zone, the forebearers of today's Discord and Facebook groups.

Over the next three years, Wing Commander III would be ported to the 3DO, Macintosh, Playstation and Windows 95 and the series would continue with massive projects like Wing Commander IV: The Price of Freedom and Wing Commander Prophecy. The game is still enjoyed and discussed regularly by fans around the world with modders and historians continuing to take it apart to learn ever more obscure details about the Wing Commander universe. Will it ever be forgotten by the countless fans who first leafed through their copies of Warbirds and Victory Streak on Christmas morning a quarter century ago? I mean, they're going to have to pry our dead carcasses out of the cockpit...