Weird and Retro posted this neat throwback to the June 1995 edition of GamePro Magazine. The feature is titled "Revenge of the PC Games" and highlights all of the the hot titles of the mid '90s and how they compare to the latest crop of gaming consoles such as the Saturn, PlayStation, 3DO and "Ultra 64." Wing Commander 3 is front and center as one of the star examples. While there's no question about where the best graphics and high end experiences were available, the article acknowledges the proportionately high price that PC gamers (or their parents) had to pay. They mention the typical machine was around $2,000, which is equivalent to $3,400 today. In comparison, the PlayStation launched that year at $299 ($500 in 2019 dollars). It's kind of amazing that so many of us were able to play through these games when they were new! 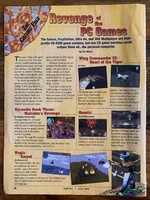 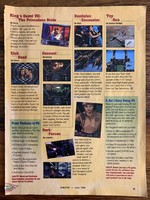 It Ain't Easy Being PC

What do you need to play PC CD games? If you don't already own a PC, the first thing you need is about $2000! (And you thought the 3DO was pricey.) Head down to the local computer store and start studying up on personal computers.

For the games listed here you need:

PROTIP: Before you buy a PC game, check the box for minimum system requirements. You can also call game companies to see if you system's up to the task.