Here's a fascinating look at Origin's product plan as of 1989, just before Wing Commander changed things. It's amazing what could have been (a Star Wars RPG by Richard Garriott!) and also how far in advance they planned for projects like Ultima Underworld. 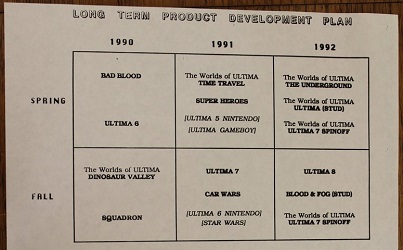 After we initially posted this on Twitter, Wing Commander designer/director Siobhan Beeman added this for context:

Honestly, Wing Commander didn't really change this product plan all that much. Super Heroes is the only genuine casualty: IIRC, that would have been Jeff George's project after Bad Blood, and I would have led Martian Dreams, but instead I took WC2 and he took MD.

Car Wars didn't happen for... reasons. (For more information, see Wasteland.) The relative failure of the WoU series killed further games in that line. U7 sluggishness, and the waning of graphical adventures, killed the STUD games.

Hah, actually, yes, now that I think about it, Wing Commander DID kill Star Wars. Not because it kicked off a bitter rivalry with their X-Wing line (tho that kind of also happened 😄), but because it made spending cash on licensed IP much less necessary/attractive.