Mike Winterbauer's Wing Commander Art Portfolio Kickstarter has officially launched! Mr. Winterbauer was the artist that painted the famous variant of the WC1 art that was used for the Super Nintendo box cover and various promotional materials. I spent a ton of time playing the SNES edition of WC1 during the early '90s, so this is very exciting to me! The campaign seeks to publish a book that catalogues the process that led to the creation of these items. For various supporter levels, there are some super cool rewards including art cards, magnets, canvas prints and even a metal portrait. Check out the details here. 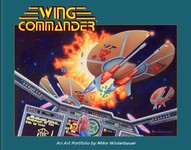 This Kickstarter is all about celebrating Wing Commander and it's cool fans! In 1992, I said, "I can't believe I get to paint Wing Commander"

I have put together this campaign to get Wing Commander fans a super cool collectible signed art book and awesome signed print rewards. This is a wonderful opportunity to pick up some fantastic Wing Commander collectibles all signed from the artist Mike Winterbauer.

The Wing Commander Art Portfolio is a beautiful 30 page hardback book, 11 x 9 inches, featuring the process of painting Wing Commander and all the cool print ads that used the painting. I have personally created the book and all rewards to ensure they reproduce my classic Wing Commander painting and logo as beautiful as possible!

The book is loaded with Wing Commander art and nostalgia!