We are again sad to bring you news that another Wing Commander veteran has passed. Artist Micael Priest died on Tuesday, September 18. Mr. Priest was an Austin legend who began drawing concert posters in the early 1970s. His artwork and connection to the music scene is recognized as a major factor in the 'weird Austin' sensibility that defines the town to this day. It should come as no surprise that Mr. Priest was also an employee of Origin Systems during the company's heydey. He worked extensively as an artist on the Ultima series, including Ultima VII, Serpent Isle, Ultima Underworld II, Runes of Virtue II, Ultima VIII and the first three iterations of Ultima Online. True to the all-hands-on-deck spirit of the era, he even posed as the model for Remarro Monik in Bioforge, one of the potential identities the player must discover (pictured.) Wing Commander fans will best know his work on the multiplayer spinoff Wing Commander Armada and the Origin FX screensaver.

Micael's loss has been felt especially hard in the Austin music community and other Origin veterans have spoken particularly highly of him. Fans should know that he represented the best of what Origin did in the 1990s: tapping the talent of all sorts of artists beyond professional game developers to create unique, unforgettable worlds. I would encourage any Wing Commander fan to read the Austin Chronicle's full obituary which details his fascinating life. An earlier feature on his life is available here. Raph Koster has posted his thoughts here. I don't think it's a stretch at all to say that the true heart and soul put into our favorite game worlds by people like Micael Priest that is what continues to make them so appealing. The Chronicle calls him "a walking, talking, real-life cowboy hippie cartoon character artist," which is as great an epitaph for a truly creative soul as any I've ever heard. Thank you, sir. 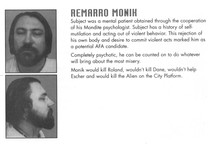 The portrait of Micael Priest included here was painted by Sam Yeates, who was both a contemporary in the Austin art scene and the artist behind the Wing Commander III and IV posters.