When Colonel Blair is first introduced to 2nd Lt. Mitchell "Vaquero" Lopez in the Orsini series of Wing Commander III, Vaquero is strumming a guitar and explains that guitars are an important part of his history: "But my family, they made guitars for many generations. I’ve got one that’s almost two hundred years old. The sound just keeps getting richer... Someday I’m going to open a cantina and bring in the best to play that guitar. A place for old fighter jocks like you and me." 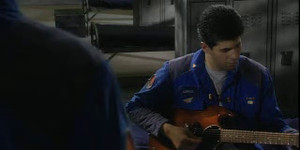 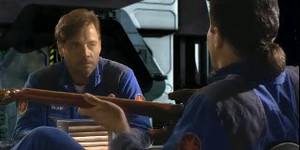 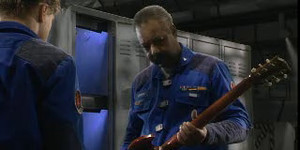 There's just one thing odd about this: while Vaquero may have a guitar that dates back to the middle of the 25th century stored safely at home the one he's happily playing in the lounge is over seven hundred years old! The guitar used as a prop in the game is a Gibson SG Junior Cherry from the 1960s. The Gibson SG Junior is a solid-bodied electric guitar intended as a lower cost alternative to the Gibson SG. If you're musically inclined, vintage guitars of the same make and model are still available on the secondary market today for several thousand dollars. (As for Vaquero's specific guitar, it was returned to his family by Captain Eisen.) The prop team don't seem to have made any changes to the original guitar; in fact, Vaquero's scenes seem to be framed to avoid showing the head. 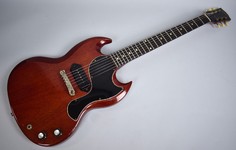