The Games on Film podcast has recorded an episode that's all about Wing Commander. They spend more than 80 minutes talking about the franchise's background and the environment that existed in 1999. Then the commentators spend quite a bit of time talking through the highs and lows of the film itself. One thing that sets this review/discussion apart from the cliche comments you frequently see is that they thought the space action was on the boring side but were actually intrigued by the Pilgrim angle. Since their focus is all about video games that have crossed over into theaters, they make a good point that FMV-centric series seem to have an inherently difficult time gaining acceptance since it's so easy to break with cinematic styles that their fans are used to. You can check out the full episode here.

Harry and Rory journey into the deep reaches of space - and the even deeper reaches of the DVD bargain bin - for the most anticipated science-fiction film of 1999 (at least for the members of the Freddie Prinze Jr. fan club): Wing Commander. We compare the cast of the movie adaptation with the stars of its FMV-featuring source material, while talking beanie hats, mini disc technology, and alien space cats. We also discover Harry's number one fear - and it's not being forced to sit through Wing Commander again! This podcast contains SPOILERS for Wing Commander (1999).

Wing Commander Meme of the Day: I bet he's thinking about other women 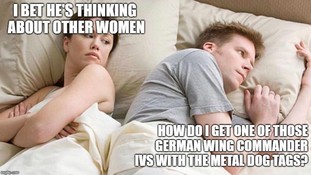