The Now Playing Podcast's latest episode is all about Wing Commander. They are obviously a movie show, but this installment actually approaches the subject from a comprehensive Wing Commander franchise angle. At least one of the commentators has a long history with the series including the games, knowledge of the TV show and the back story of the WC Movie itself. They poke fun at some of the sillier elements of the film, but they credit things like its pioneering first use of time slice "bullet time," which is cool. They spend a full 90 minutes hashing everything out, so they cover quite a bit of ground. Check it out for yourself here.

Game developer Chris Roberts was on course to deliver the first major science fiction film of 1999 when he personally piloted his massively popular flight simulator Wing CommanderPhantom Menace and The Matrix. Do fighter pilots Freddie Prinze Jr. and Matthew Lillard offer a new hope for genre fans as they clean the cat box of feline space invaders The Kilrathi? Or should Arnie, Justin, and Stuart quickly eject from this next entry in the Now Playing Arcade? Listen and find out! 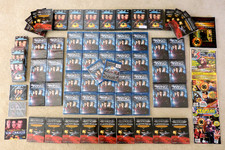