Death^_ tipped us off about a really cool advertisement for Dragon Con 1996 posted by Wade Haddock. The sheet shows off the various celebrities that would be in attendance, including Mark Hamill! Note that this is not "Star Wars' Mark Hamill." In fact, Star Wars isn't mentioned at all, which is funny since this appeared in a Star Wars comic. He is simply billed as Colonel Christopher Blair in Origin Systems' Wing Commander IV. Right on! That's what springs to my mind first too... Of course, this appearance happened just four months after WC4's release, so it was particularly relevant at the time. 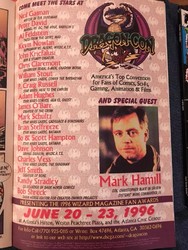 Scan of an ad from the April 1996 issue of the comic adaptation of the Star Wars EU story "Splinter of the Mind's Eye" (third of four issues). Notice the Special Guest announcement on the bottom-right corner of the ad.