Charting the Evolution of the Vega Sector

Welcome to the Vega Sector! Here's the original star map sketch that became a page of Wing Commander's Claw Marks manual. The map was redone for several ports and even included as a poster in the FM Towns release (the blue one). The only problem: it's supposed to be to scale but the distances change in each version! Note that "Hell's Kitchen" becomes "Apocalypse" in the SNES version because Nintendo. 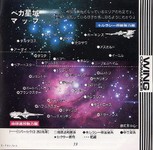