UnnamedCharacter's latest creation is an assembler/disassembler app for Wing Commander 2. He provides examples of disassembled code and how the program works in practice. It all looks way more advanced than my simple mind can comprehend, but there is one cool demonstration of the possibilities. After digging in, tweaking the text at the right point allows for manipulation of the cutscene subtitles. Although it would be no small undertaking in the least, really cool hacks like this make you visualize how some really cool Wing Commander 1/2 mods could be possible one day. Grab the new program for yourself here. 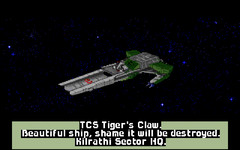 I put together a simple assembler/disassembler. Although it lacks the sophistication demonstrated by lskovlun, it does have the basic functionality of managing jump targets. Unfortunately, it does have problems with two files, when disassembled they will not re-assemble: The problem are jump values that appear to be too large, they jump beyond the end of the file. For the time, avoid these two files.

Not quite a "Gash" Dekker, but he has heart.