Playstation & 3DO Square Off In New Video Comparison

3dokid has put together a neat comparison that shows both the Playstation and 3DO versions of Wing Commander 3 playing side-by-side. PC players who might not be as familiar with the console variants might be surprised at the differences. The PSX game was a relatively faithful recreation of the DOS version. Ground missions were cut, but the larger discs allowed the inclusion of some awesome cutscenes that didn't make it in the computer release. On the 3DO, the engine was redone so it might not look quite as flashy as the original, but all of the missions were updated for a newer action-oriented experience. The weapons were tweaked with the Vampire missile replacing the Leech, and new UI/story elements were also added. As a bonus, they also put together a "Top Five 3DO Games" feature a while back and Wing Commander 3 made the cut! There's additional footage of the game being placed with the full cockpit in place, which is still gorgeous. Jump to the 3:50 mark if it doesn't autoplay at the WC3 sequence.

Wing Commander Meme of the Day: Grandma Finds the Internet

They don't call it super VGA for nothin'! 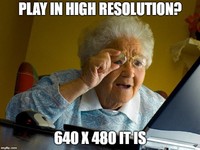