Origin composer George Oldziey has completed his live recording of Wing Commander jazz music. The event was conducted last week at George's studio in Austin, and pictures from the day make it look like they had a lot of fun! Initial results also sound fantastic, and we're anxious to hear how everything comes together in the finished album. He's released this super cool preview to whet fans' appetite: 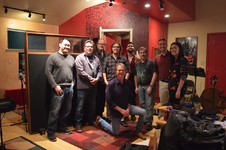 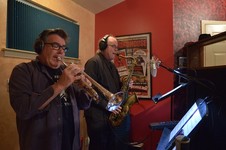 Greetings all! It's been a while since my last post. I just wanted to report that we recorded the Wing Commander bar music in my Austin studio last weekend, and the results were great! The musicians did a great job, and the fans who were there (who backed at that pledge level) had a great time.

I'm almost done mixing the music, which will of course be on a new CD very soon. In the mean time, here is a "teaser" MP3 for you all to enjoy!

Also, there is a "surprise" track in which I took probably the most famous theme from my Wing Commander scores and turned it into a Latin Jazz arrangement! Might sound a bit sacrilegious but it was meant with a lot of excitement.