Klavs has taken a well earned break from designing real space ships to further expand his Wing Commander fleet. Today's addition is the powerful Waterloo cruiser. We don't get to admire this ship as much as we'd like in WC2, so it's nice to see how fans have taken a liking to it. The detail on the model helps convey the sense of scale, and its twin landing strips look like a lot of fun. Escort carriers get a lot of credit for being the lightweight alternative to the large fleet carriers, but cruisers like the Waterloo did their part too! 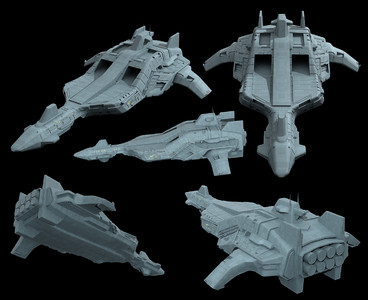 The destroyer had taken position above us, in clear space above the gas giant's outer atmosphere.

He had estimated our position within a couple million cubic kilometers. We couldn't manuver without being detected, and he couldn't waste his entire warload on an area that large.

Some genius computer programmer in SysFleet had decided the audio tone for a hostile sensor burst in high EM situations ought to sound like an old fashioned sonar ping.

You know, like in those XXth century movies about pre-hypercavitation, pre-lidar, fossil fuel submarines? Sitting in a tin can, listening helplessly to the sensor pulses that are narrowing down your position with nothing to do but wait for death?

The computer, synthesizing millions of pieces of information pertaining to proximity, bearing and intensity, was helpfully making the sonar pings louder. And louder, and louder. Suddenly, they stopped completely.

The relief of tension on the bridge was palpable. The captain thoughtfully caressed the mute button before turning to me and speaking in a blessedly clear tone.

"Xi, lets go to battle stations, and stand by for a magnum launch. Prepare to secure from silent running. Stand by full thrust."

In my century, pings go both ways.