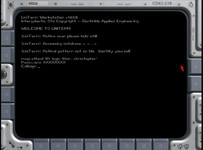 Mainstream gaming news site Kotaku has an article that promises a hidden, text-based adventure game hidden inside Wing Commander: Privateer. And it's true! The original Privateer shipped with a small file called TABTNE.VDA. Reversing the filename gave you an executable, ADVENT.BAT... and running that let you play a small, unusual text game called Art D's First Batch Adventure! Origin programmer Arthur DiBianca included a second game, Art D's Next Batch Adventure, with Righteous Fire and then both were included on the CD-ROM version of Privateer. A third and final game, Art D's Third Batch Adventure, was hidden inside Wings of Glory. You can play all three games in your browser at Archive.org (though, be warned: they do not have anything to do with Wing Commander!)

Additionally, a copy of the classic 'Animal Gump' computer guessing game is hidden inside Wing Commander IV. Start a new game, access the terminal as though you were about to select your callsign and type 'animal' while it is starting up (BEFORE you enter your name.) The game will start right there in your browser! Can you teach the Lexington's computer what animal you're thinking of?