Today marks a whopping twenty-seven years since the original Wing Commander game shipped to stores! The franchise still doesn't seem a day over twenty-five to me! On the series' tenth anniversary back in 2000, we said, "Here's to another decade." Now, incredibly, the end of its third decade is practically in sight! This community has grown up together and welcomed many new faces over the years, but everyone's incredible creativity and dedication continue to amaze. And somehow, even after all these years, we keep learning about new facets of the Wing Commander universe. A few weeks ago we covered several different decals that were affixed to the WC1 box. They're essentially meaningless - they're all the same version of the game - but to collectors like us, they're fascinating historical items. And we've just found another one! It features the familiar tagline, "What you see is what you play!" (for the most part!) Happy Birthday, Wing Commander! 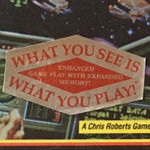 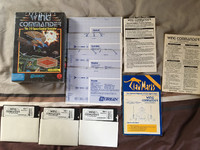