The Proof is in the Printing

The Wing Commander Combat Information Center would like to officially congratulate Michael Winterbauer on the success of his Classic Game Covers Kickstarter! As reported, the printed book will include his Wing Commander SNES cover painting and some background on the process through which it was created. Roughly 20% of the pledges went to levels that offered Wing Commander-specific extras, so we can be proud of helping as a community!

Mr. Winterbauer updated the project yesterday to share that the artists’ proofs for several of the bonus packages… including the one we’re highly anticipating, the Wing Commander set (which included a large print and five smaller ones showing the development and use of the artwork!) Word is that everything looks great:

I have received press proofs for the book, Classic Cover Collection, Wing Commander Package and Classic Large Prints Collection. Everything looks fantastic and is ready to print more. As soon as I receive my funding I will order the print run of Classic Game Covers, which should be very soon! I will be sending out the surveys next week so be sure to fill out so I can start sending rewards. 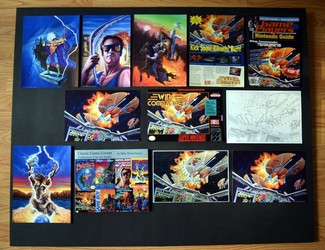