A new screenshot from the long-lost SNES port of Wing Commander 2 has been discovered! Like previous discoveries, this screenshot appeared in 1995 gaming magazine... but it is not attached to a review of the game. Wing Commander 2 was completed by a team at Origin Systems and then shipped to FCI for duplication. Unfortunately, the decision was made not to release the already-finished game, owing to the expense of larger-than-average cartridge needed to store the game and the fact that it was coming towards the end of the console's life cycle (Q4 1994 SNES sales were far lower than projected, owing to the rise of 32-bit consoles.) As you can see, this screenshot is absolutely enticing for fans of different takes on Wing Commander games: it's the previously seen two-VDU'd Ferret with a completely redrawn Sartha target VDU. If you have any knowledge of the game's location (or a connection to FCI) please write in immediately! 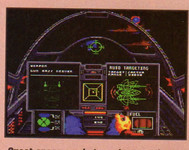