There's great news tonight for fans of fine art: Mike Winterbauer's Kickstarter has met its funding goal! That's thanks in no small part to Wing Commander fans like you. There are still twenty days left to pledge, if you're interested in a copy of the book we encourage you to check it out! There are two tiers intended specifically for Wing Commander fans... and how often do you get new, physical WC merchandise?

In honor of this news, here's another blast from the past. Think you've seen every appearance of the SNES cover art Dralthi? Here's one more for the collection! This "Super Power Club" trading card (#57) was randomly inserted in sheets of 6 into issues of Nintendo Power magazine in 1992. Each card in the series features a different Nintendo game... but this is the only one related to Wing Commander. Think you're up for that challenge? 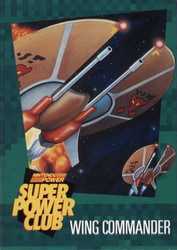 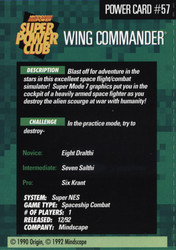