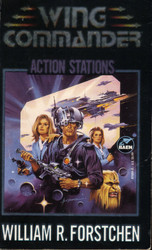 Get ready for Action... Stations! The sixth Wing Commander novel's ebook March 7 premiere is fast approaching and several e-tailers have gone ahead and put up preorder pages for the book. Action Stations will be the fifth Wing Commander ebook released, with False Colors scheduled to follow in April and End Run rumored for later this year. You can go ahead and preorder Action Stations at the links below; at press time, only Barnes and Noble has yet to list the release. Want to get a head start? Those that purchase Baen's March 2017 bundle get access to the first 3/4ths of the book today! The bundle includes DRM-free ebook copies of every novel Baen is releasing this month; it is available only for the next eight days.