Stories set in distant futures have an interesting challenge: what frames of reference should the characters display? For example, Wing Commander takes place roughly seven hundred years in the future. Should characters speak in a 'future dialect' or in a manned immediately comprehensible? The 'middle road' is usually chosen: a contemporary frame of references with a small set of consistent references to build immersion by suggesting that time has moved on; calling movies 'holovids' or guns 'phasers,' for instance. One major casualty of this narrative choice is the development of a future history. Can you imagine referencing events, figures and cultural phenomena from only the 14th century today? But we rarely learn very little about the years between 1990 and 2654 observing casual conversation.

Except when we do! Dr. William Forstchen, author or co-author of a majority of the Wing Commander novels, has an interesting rhetorical trick which he deploys throughout the series: the 'sci-fi list.' Here, Dr. Forstchen has a character recite a list of familiar like events from the history known to the reader... and then adds one or two more similar events that would have to have happened in future years. Through a few small references, we learn a great deal about Wing Commander's future past, teasing references to battles, leaders and enemies that will likely never be expanded upon. It's the best sort of immersion: one that implies there's a bigger world that the characters understand which you do not. What follows is a catalog of these references...

Fleet Action features two lists, each about Admiral Tolwyn's ancestors. Early in the novel, Tolwyn describes his military background: "Tolwyns served at Waterloo, on the Somme, in the Battle of Britain, at Minsk and the siege of London and shed their blood heavily in this latest war." Later, his internal monologue runs through a similar list on the eve of battle: "It had been used by his ancestors when they had stood at Agincourt, Waterloo, the Somme and against Hitler and Zhing." (The overlap here does suggest that Zhing is likely the villain associated with Minsk and/or the siege of London. Note also that at least three Confederation warships have taken their names from battles mentioned here: two TCS Agincourts and a TCS Waterloo.) 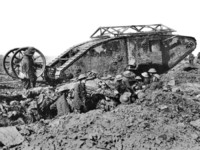 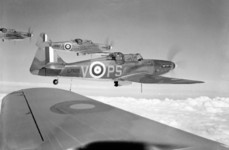 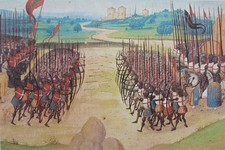 In the introduction to Action Stations, the novel's in-lore author, Colonel Schwarzmont, attempts to compare Admiral Tolwyn's life to that of famed traitors throughout history: "One must go far back in history, to Alcibiades during the Peloponnesian Wars, Benedict Arnold in the War of American Independence, or Sun Wan Lu in the Faraday Rebellion, to find a military leader so gifted, and yet so controversial and doomed by his own brilliance to a final, irrevocable downfall."

Later in the novel, Commander Turner likens a list of historical surprise attacks launched on holidays to the impending Confederation Day McAuliffe Ambush. "Washington did it at the Battle of Trenton and turned the tide of the American Revolution. Sure, the British and Hessians screamed foul, but it brought victory. The Arab states did nearly the same thing in the Yom Kippur War of 1973, and the Mongols did it in their Chinese New Year strike of 2082." 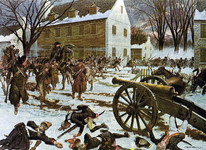 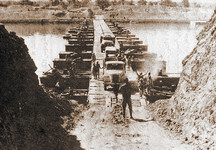 At the end of the book, Admiral Banbridge writes a memo to the head of fleet intelligence which compares the recent attack on McAuliffe to historical military disasters: "One can look back to the China Sea, Pearl Harbor, Tsushima, Salamis and not find a defeat so lopsided." (This one is presented in reverse.) 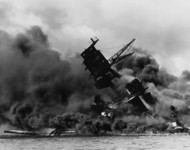 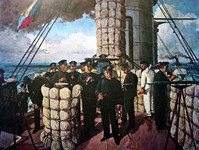 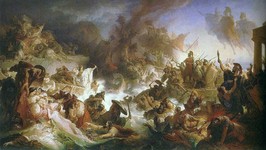 False Colors offers a short history lesson as Admiral Tolwyn attempts to convince Jason Bondarevsky of the merits of a dictatorship: "But there aren't many men like Washington or Cincinnatus, Jason. Rome had Caesar and Pompey; America had Harold Jarvis back in the early twenty-first century. I was tempted to play Cincinnatus and defend the Confederation, but I'm damned if I'm going to help some ambitious bastard play Caesar!"

Finally, Peter Telep also uses this trick in Pilgrim Stars, again citing historical dictators in comparison to Admiral Tolwyn's plan to target Pilgrim settlements: "Doing that will earn him a place in history next to Khan, Hitler, and Tralchar."