Ejection Seats Coming To A Flat Cockpit Near You

Ejections have a prominent place in the Wing Commander series. WC1 broke new ground by establishing it as a viable tactic when things were at their worst, and games throughout the franchise have added their own special derivatives on this theme. Flat Universe will continue the tradition with its own high quality ejection modeling, and the Maslas Brothers even tease that there's a significant role to be played by ejected pilots in the forthcoming multiplayer mode! 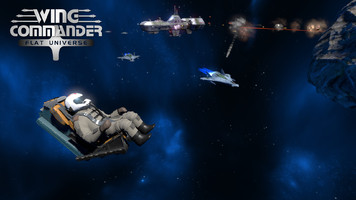 Ejection sequences always used to be some of my favourite moments in the Wing Commander series, especially the one on WC1, although I was always trying to avoid them in campaign. This moment or better say option will be included into the world of Flat Universe. The following screenshot was taken during our development tests. In other words this is what you are about to experience after managing to eject before your ship goes into pieces.

Tip: Ejections will play their strategic role in the multiplayer part of the game, too! :)