This week's Wing Commander Flat Universe preview isn't very flat at all! It shows a wing of Hornets rushing in to assist a Confed destroyer under siege by several larger Kilrathi combatants. On the positive side, it appears that the Fralthra in the lead has taken quite a few hits. It's nice to see the Maslas Brothers putting Klavs' beautiful ships to good use! 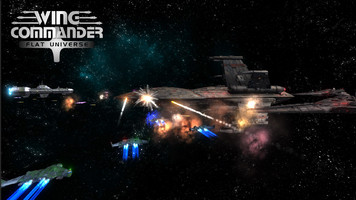