The Wing Commander Movie was released in theaters 17 years ago today, and to celebrate, LOAF and Thomas Hennessy have digitized the film's elaborate universe map. It all comes together in one whopping image that's nearly 20 megapixels big. But since we're Wing Commander fanatics, it was also carefully photographed in individual segments. While this delivers fantastic detail, it also leaves quite a task to someone brave enough to stitch together all the frames in Photoshop. There are about 30 different angles, although they've uploaded all 111 original images so everyone can see the raw material. If you'd like to try your hand at making one massive file, or if you'd just like to take a look at all the beautiful space art zoomed in, check out the photos on Google Drive or download here (500 meg zip). Hang tight while the photo below loads - it's 10 megs alone! 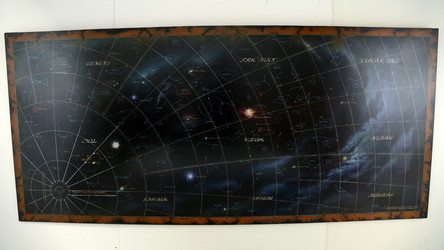 Happy birthday to the Wing Commander movie, which hit theaters 17 years ago today! We've taken several dozen high res detail photos of Chris' Wing Commander map... any Photoshop aces out there want a puzzle/project? It was created for the intro/credits of the Wing Commander movie, though you only see part of it (with glowing FX) there! I think it's super cool that it uses the same sector layout as the WC Prophecy Universe Map, but styled like it was made by explorers.