DefianceIndustries continues to stretch the Vision Engine. His latest efforts have resulted in a couple of his fine looking Border Worlds ships being successfully imported. Since his initial project is titled the Secret Ops model upgrade pack, DI's not trying to do any kind of elaborate crossover, but it's possible these ships could make it into the simulator for an interesting diversion. Sounds like fun! 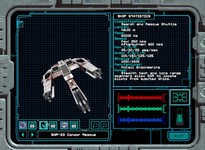 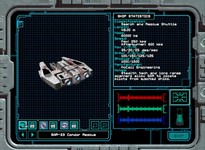 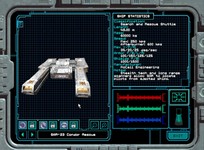 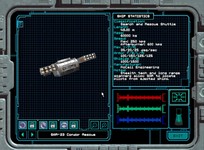 I've been monkeying around with the update patch to see what I can shoehorn into the engine. Based on what I've been told, the below doesn't really stretch the limit but it's a good test. So I used my Banshee as a test subject, since in its original form it would blow up Vision (it has more polys than most of the WCP capships). I converted it to an .IFF directly with no changes and below are the results.

As you can see it's pretty faithful. I'll want to throw it into a sim mission at some point to see how they perform. This is sort of a tangent to the actual progress on the MUP; and it plays well to my magpie-like ability to chase the next shiny thing; but it will be useful to know this info as we go forward. As a fringe benefit, if anyone on the UE staff wants the .IFFs when I'm done and the patch is released to do, say, an update of their own... well... :)

My Durango has been languishing in "Gearbox Patch Hell" for the last several months, I was afraid she was going to go to waste... :) This was my second test of the new patch. Not quite Galactica-scale polys but a respectable 20K faces/ 48K triangles.