Kilrathi Lurk In The Shadows

Here's an idle weekend observation that might blow a few minds. LOAF keeps one of the slick fiery logo Wing Commander Movie Posters hung above his desk, and after countless hours staring at it, he just realized that a large Kilrathi head looms in the background. Wow! I have to admit I never noticed it either, although AD points out that it's also visible in the French and Spanish advertisements for the film. It's definitely easier to spot on the version for France due to how the image is cropped and the text is superimposed. The more you know... (and even without the giant Kat, it's a darn cool poster!) 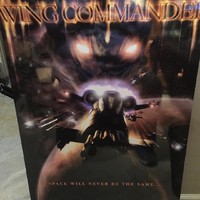 banditloaf: It took me sixteen years to realize there's a Kilrathi face at the top!