With all of the excitement over Wing Commander 1 this past weekend, it's been easy to overlook another classic Origin (via Looking Glass) game in the news. An enhanced version of System Shock was released last week. While this famous RPG/shooter deserves a major spot in gaming history on just its own merits, the CD version of the game also added a fantastic Wing Commander minigame! You can find a full writeup of the game's thirteen missions, read what the various wingmen said and download a savegame with the minigame unlocked here.

The original disk version of System Shock included a number of mini-games you could collect during the game's cyberspace mode and then play whenever you had a quiet moment. These were small, simple games that loaded in the player's left VDU - versions of things like Pong and Tic-Tac-Toe. For the subsequent CD version of System Shock the designers went all out and included a major homage to Wing Commander: Wing 0, a tiny Wing Commander shooter.

"...for the CD game I outdid myself with a relatively complete Wing Commander minigame, Wing 0--written just before Wing 3 was released, it's both an homage and a parody, featuring, for example, one pacifistic wingman who refuses to fight (and strangely never gets attacked either, because he's actually a traitor!!!), a mission where you get something like 8 wingmen, and a final 'aww, what the heck, let's send you out by yourself to defeat their entire armada' mission." 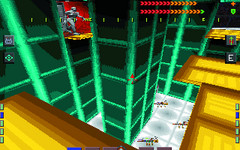 The easter eggs didn't just go one way. WC3's Victory Streak also included a review of the Hail SHODAN holovid movie, which references the main antagonist of the earlier game. 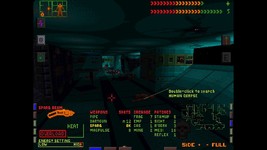 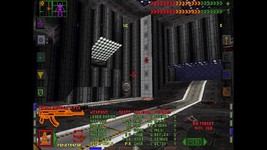 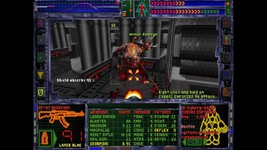