The 25th anniversary of WC1's release is fast approaching, and we'll be celebrating with fan par excellence Bandit (LOAF) in a special livestream event next Saturday, September 26, on Twitch! You'll get to see Mr. Ben Lesnick take on all of the Vega Sector's most classic missions and hear about interesting behind-the-scenes trivia along the way. LOAF's proved his piloting skills in tournament play before, and now everyone will get to see him in action again! Fans without Twitch accounts can also join us in #Wingnut during the show. To get a taste of what to expect, check out the Wing Commander Movie viewing party here. More details will be confirmed next week. For now, here's a sneak peek of the awesome digital viewing rig that's under construction for the event! 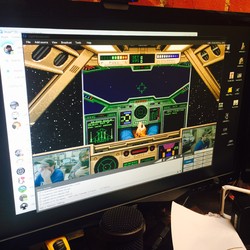