Stinger has announced the release of the first playable version of WCDX for Kilrathi Saga WC2. The initial iterations of the patch streamlined and fixed many elements of the DOS to Windows WC1 conversion done KS. It upgraded graphical calls to DirectDraw with more modern Direct3D, added increased compatibility with modern Windows, squashed some annoying audio bugs, added in some graphical elements that didn't function correctly and much more. His previous efforts reached as far as The Secret Missions 2, but now he's working on the Enigma Campaign. Note that this is still an alpha test as far as WC2 is concerned, but it's at a point where pilots can try things out and provide useful feedback. You can grab the latest version of the patch here (complete with installation instructions) and follow the development at the CIC Forums. 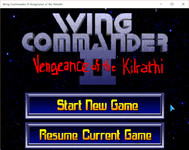 It's playable! But that's about all I can guarantee for this release. So far, I haven't done anything beyond making the game playable (already a minor miracle; I have no idea how these games ever worked before); this is a very early alpha. I still have a ton of work to do to get this up to my usual standards. In fact, I haven't even played all the way through the first mission yet! So far, I've observed some issues with input and sound, where some lines of dialogue in the intro are being skipped as if you'd hit a key. The cutscene frame rate also seems higher than it should be, but maybe I'm just remembering it wrong.

Things I've completed: The game starts and doesn't crash when you look at it funny! Hooray!

Things I haven't completed: Anything else. Really.

I'll try to take some time to fix major issues that prevent people from playing the game (provided they're reasonably simple to tackle), but I can't handle feature requests just yet. That said, feel free to post any requests or issues you come across so that I can refer back to them later.