Microsoft revealed big news at E3 this week when they announced that the XBox One will gain backwards compatibility with XBox 360 games. Twenty-one titles are already functional for XBox Preview members, and about a hundred will be online when the feature formally launches later this year. Additional games will be added each month, and players have an opportunity to vote for their favorites. This development gives Wingnuts a glimmer of hope that Wing Commander Arena could see renewed interest if it were added to the list. Although it's still easy enough to fire up the 360 and jump into the Bearpit today, backwards compatibility on the One would add bonuses such as the ability to natively take screenshots, record videos or stream games to the internet via Twitch. It's also likely that titles will see a spike in sales/players as they are added to the list. It'll be easy for people who just own the Xbone to buy Arena online and then play.

There are currently 1559 potential XBox 360 games that are candidates for XBox One BC after things like hardware peripheral issues are filtered out. Microsoft has created a website where gamers can vote on which should be most strongly considered. Arena currently sits at 1217th place. For comparison, about 51% of the original XBox library was eventually made compatible on the 360 over several years of updates. Games weren't chosen strictly on popularity as developer factors or technical performance may have also weighed in. Still, it doesn't hurt to let Microsoft and EA know that there's an audience out there who'd like to play! To cast you vote, follow this link (or search for "Wing Commander" at xbox.uservoice.com), click "sign in" to input your Xbox.com credentials and then hit the small black "Vote" bar under the vote count. You're all done when the bar changes to "Voted!" And then sleep a little easier tonight knowing you did your part to support the Wing Commander community today! 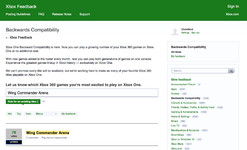 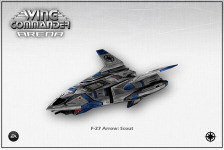