Two iconic wings of fighters have been added to the WC Vega flight roster. Two foam-and-cardboard Scimitars were completed first, but they've been the most challenging design to build so far. A pair of Dralthis came together a bit more easily, and their presence allows Mike Peters and his students to set up some slick space combat action in their upcoming fan film project. All of the lightweight ships have been suspended on wires to set up a variety of dramatic angles - the test shots below look pretty promising on this front. Check out many more making-of photos and progress on the story at their website here. 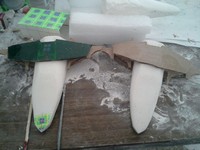 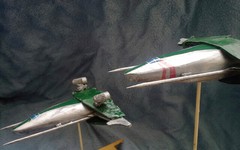 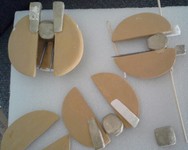 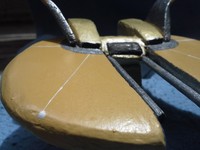 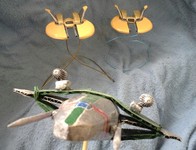 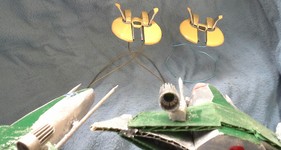 Scimitars. Are. Hard. I think I have discovered why we’re outnumbered out there. A Scimitar is a technological marvel, a balancing act.

The idea was to create two chassis, and then make the wing assembly detachable. There are over a dozen different paint schemes on the Scimitars, and having a different wing-set for each pilot would make it easy to pick out your favorite pilot in a picture of many. It didn’t go so well.

The problem boils down to materials. Cardboard is too flimsy to use as wings. Chassis foam is too brittle. Eventually, I broke down and used pastry foam, which worked, but the plaster came off, and the paint ate it, so it looks terrible. I will find something, even if I have to use balsa.

Dralthi are the best. Dralthi I/II’s are the Wing Commander Franchise Player. Easily recognized. Distinctive. Attractive. My Dralthi have cats’ ears because cats’ ears are cute, and cute sells. I might be getting better at this.