Star Wars Episode 7 is set some 30 years after Return of the Jedi and will include many original cast members, with Mark Hamill reprising his iconic role. One crucial flashback scene will feature a young Luke Skywalker, and rather than make Hamill appear 25 again through CGI, a new actor has been cast. No, it's not Freddie Prinze Jr., but relative newcomer Robert Boulter. 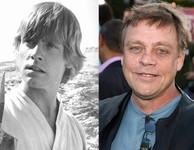