Based on all the positive feedback Aginor has received lately, he's more formally relaunched development of the Sivar's Hand mod. A number of Kilrathi-styled design elements such as fighters, user interface, voices and awards are already coming together, but the story that glues the existing missions together still needs to be filled out. The game's difficulty will be tame in order to avoid scaring away less hardcore pilots and allow them to fully enjoy the experience. Aginor is also looking into the best way to plan development around individual missions so that development is more bite-sized and manageable. There are a few things he could use help with, so if you've got artistic or other modding skills and would like to help, drop by the CIC Forums.

As I am trying to get the mod development out of its hiatus I figured it would be a good idea to post a development thread. Until now the info about my mod is spread over several threads, I am trying to change that. I am also going to try and write small updates at least every two weeks, to try and motivate myself to finish this thing.

About the story: The most important plot points will be in the briefings and a few in the missions. Reading the story is not required to enjoy the missions. I love story, and I am writing a full (and not too short) story that I hope people will enjoy. So I decided to not include the story in the mod itself, but to include it as a PDF file to read on your phone, tablet, PC or whatever you like. There will be breaks in it that tell you when the missions are supposed to be flown, in order to not spoil them for you. In good old WC fashion the story is about a rookie pilot on his first assignment.

So where are the blockers? Well, the story is in my head, but not on paper yet. Most parts of it are finished (9 of 12 chapters, approximately), and thanks to capi the words sound much better now. Keep in mind that I am not a native English speaker, and I am writing that thing in English (what the hell was I thinking?) This is probably what will take the most time.

The missions are not quite finished. They are all there, but they lack some dialogues, debriefings, possibly voiceovers, and a bit of balancing/bugfixing. Also the player isn't given any awards or promotions yet.

I still need some graphics. Not many, but a few. A Kilrathi player portrait is the minimum. If I can't find someone to render or draw it, I will take a Kilrathi helmet from WC3 and use that. But I would like to have that, and a few more portraits for main characters in the story PDF. So if an artist reads this and wants to draw some space cats: PM me! :)

That's all for now. My first task: I will try and write another chapter for for the story in the next few days.

For the glory of Kilrah, the Emperor and the Empire! 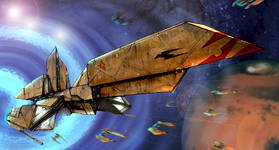