CGM Looks At Celebrities In Games 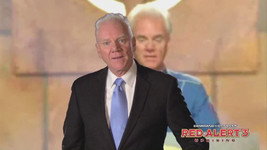 CGMagazine's Kate Richards recently posted a piece about celebrity actors in videogames. From Norris to Spacey: Celebs in Video Games touches on voice acting, the full motion video craze of the 1990s, and finally the shift to motion captured animation. Check it out here.

Then there's fighting your way through space on the TCS Lexington in Wing Commander IV, between cut scenes of once-retired Colonel Blair (Mark Hamill)'s attempt to find and destroy the threats arising on the Border Worlds. Blair should consider himself lucky that Admiral Tolwyn (Malcolm McDowell) called him back to the military. His plan to become a farmer on a desert planet probably wasn't working out too well. WCIV's cut scenes account for nearly two full hours of celebrity-stuffed, full motion video action. Amazing.

The newest way to include celebrities in games is with motion capture and performance capture technology... This method not only features the voices of celebrity actors but the digitized movement of their bodies and facial expressions. Now celebrities can be fully active in video game cut scenes, like Hamill and Jones were in Wing Commander IV and Tiberian Sun, but act as the playable main character throughout the game as well with the digital capturing of their physical attributes and expressions.